Following the appointment of Liz Truss as the new Prime Minister, the new Chancellor Kwasi Kwarteng is due to present, what has been billed as a ‘mini budget’, on Friday. 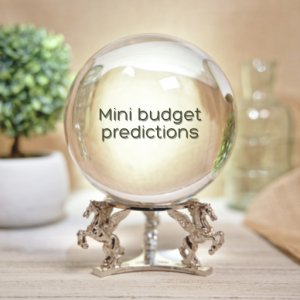 Unfortunately, due to prior commitments, I will not be able to share with you my normal post-budget commentary on the day, instead I am sharing my thoughts with you now.

The new administration is keen to act as quickly as possible on the tax cutting pledges which were made in the lead up to the appointment of the new Prime Minister.

There are currently some material challenges facing individuals and businesses as they wrestle with increasing inflation, the energy costs escalation, and fear of a recession later in the year which many financial commentators are predicting. Liz Truss, and her cabinet colleagues, no doubt want to show that they are aware of the serious financial issues affecting the country and that they are prepared to ease the tax burden for many. The new team will be well aware of the need to target any proposed tax cutting measures in a way that benefits those most in need. This will not be an easy task with so many different sectors of society and business in need of help.

I now take the opportunity to identify some of the initiatives which we might see announced on Friday:

We may see a surprise or two, bringing forward the promised reduction in the basic rate of income tax to 19% has been mooted, but as this is an ‘emergency budget’, announcements are likely to be limited to key measures which deliver the tax cutting promises which have been made by Ms Truss. Any surprises may be kept hidden until a little closer to the Election.

The tax cuts are likely to breach the fiscal rules which require a reduction in national debt as a proportion of national income in 2024-25. It may be that the Chancellor has to extend this target into the next parliament. Any such move would need to be confirmed in the formal budget in November.

It will be interesting to hear Mr Kwarteng in his first major speech as Chancellor. Whilst his team have had a very limited time in which to formulate any new measures, I sincerely hope that they have been properly thought through.

One consequence of the fiscal event is likely to be more complicated tax compliance for this current tax year, which will be a boon or a headache for many.

As I have said many times in the past, I hope that we do not see further complications in the tax code as a result of any new, and ill thought through, proposals.

If you have any questions, or other points, in connection with these mini budget predictions, please do not hesitate to get in touch through the normal channels.